Way back when I first decided to get into self-publishing, I played with making my own covers. Eventually, I realized this was not going to do the trick. I wasn’t good enough. I didn’t have the eye to make my covers stand out, and forget branding. So I started looking for a great book cover designer that I could afford. A friend recommended Farah Evers Designs, and I’ve been so grateful ever since. She’s done all three of my Sleight of Hand covers and she designed Out of Time better than I could ever hope for in spite of the fact that I asked for weird stuff like a raven mocker. And then she worked overtime to get my book trailer done in time for me to use it for promotion. So obviously, I think a lot of this lady, and I hope you’ll help me make her feel welcome here.

I would like to thank Michelle for having me today as her guest. It’s always a pleasure working with you. I wish you great success with your writing endeavors.

Let me begin with this excerpt from one of my articles, I’m Human, I Design Book Covers, which I wrote in the past about my creative process.

I did not study Graphic Design, but I’ve worked in the industry for around 13 years. My father was one of very few people who contributed to the development of graphic design in the Arab world, back when they did things by hand, not computers. As a journalist and ex-politician at the time, he published his own magazines. I grew up watching his staff piece together bits of elements, fonts and stencils. They worked on giant desks, under intense projection lights and with utmost precision. My father’s designs were always conceptual. He would sit down and explain to me about every element and its function, and I watched him with great admiration.

In the early nineties, I discovered a software package called Corel. As people became addicted to the internet, I had owned my own ISP Company at a young age, and so I got addicted to playing with software. Corel came with its own photo editing software, which I used up until a few years ago when I made the switch to Photoshop. I use both of them today to produce my work.

“How Do I Work?
First I start by looking at the form authors are required to fill when requesting a cover. Why the form? Because it answers just enough questions, but doesn’t inundate me with information. Too much information creates a weak point in the cover creation process, methinks. I believe that the less the designer knows, the better the final product will be.

See, I like high concepts. That’s how most of the work begins, or at least how I wish I could make all my covers. Sometimes, some authors will request or even dictate what they want on a cover, and I will oblige. However, the way I approached design my entire life was from a conceptual, if not abstract angle. That’s just a personal preference, and I do understand that’s not going to always work on a commercial level, especially in this time and age.”

Creating Out of Time

I started by creating the key elements Michelle requested, like the symbolic raven mocker, mountain laurels, clocks, and so on.

In order to incorporate all elements she wanted, I began by creating each one separately. There was no available stock of raven mockers, so having to improvise, I started by combining an actual raven with a Native Amrican’s body. The result was something like this:

Next, I needed a time portal of sorts, but without losing the authenticity of the fantasy feel. Here the introduction of a fantastical element, without it verging on sci-fi is considered, especially since I needed to incorporate a clock with the exact same feel. This piece seemed appropriate. 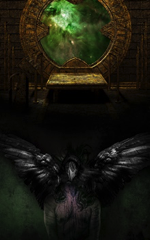 At this point, I decided to choose a nice font that represented the genre. There were more elements missing, but first I had to make sure the design was coming together. 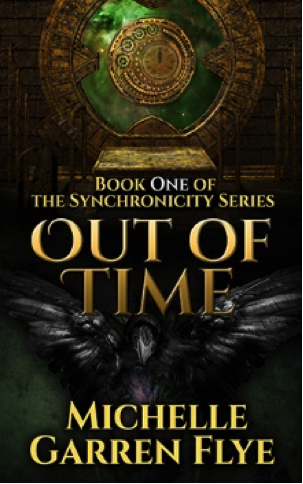 At this point, I would have called the cover done, but of course, the mountain laurels were missing. I added a pattern for the top and bottom, as well as the flowers to finish representing the author’s vision. Final touches were a couple of flares, and the result was a cover Michelle immediately approved.

I’ve only recorded my process once. If you’re interested in seeing a cover come together, you can watch me create a cover here.