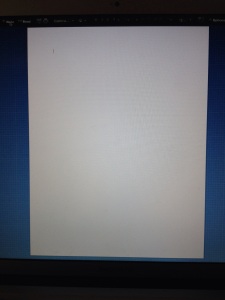 A new year started at midnight and I was up to let it in. I have this tradition of “letting in the new year.” My husband laughs at me, but every New Year’s Eve as soon as it strikes midnight, I open the front door to take a breath of the fresh air of a fresh year. A year in which I’ve made no mistakes.

It’s exciting and frightening at the same moment. Like a blank page on a computer screen.

I’m sort of in between projects right now. I’ve got several started but haven’t been able to commit to one idea since National Novel Writing Month ended successfully for me in November. I tell myself it’s okay. There’s nothing wrong with taking a break, especially after such an intense exercise as writing 50,000 words in 30 days. But the truth is, when the words don’t flow, I get spooked.

That’s when the self-doubt begins. Maybe I never was meant to write, anyway. Maybe I’ve been wasting my time. Time I could have spent with my kids, but instead I sat in front of a computer. Dreams of being a successful writer–dreams I’ve had since I was seven years old–seem trite when the words won’t come.

But I know they will come. It’s like building a fire without kindling sometimes. Try as you might to light a green log without kindling, it won’t catch fire. So you add some. A few words, an outline, writing a scene…you throw all that into the mix until something sparks and suddenly the story takes off. The log catches fire.

Happy New Year, everyone. Here’s to a word-filled, successful year for myself and all my friends, whether they’re readers or writers. Let’s embrace the blank page with all its fearsome possibilities. It’s only as terrifying as we allow it to be.