It’s not that I don’t want to. Or even that I don’t try. It’s just that I’m told…over and over…that even though my stories have strong romantic elements (and…spoiler ahead…a happily-ever-after ending), they’re not really romance. Check out the following quotes from actual reviews:

“Reading this book was an odd experience, and my grade for it really depends on what it’s trying to be. As “womens’ fiction” this is quite an engaging story, but as a romance it fails.” –Amazon review for Where the Heart Lies

“Even though I was not thrilled with the romance in the book, it is still a worthwhile read.” –Amazon review for Where the Heart Lies

“a well-written, thought-provoking novel and is not what I expect from a typical romance” –Amazon review for Ducks in a Row

“Although categorized as romance, it is not the typical romance that I normally read.” –Amazon review for Ducks in a Row

You get the picture. I have had to accept the fact that I don’t always write the typical, run-of-the-mill, escapist romance. However, I feel the romances in the two books above were the meatiest (ooh, not a romantic descriptor at all) ones I have ever written. And here I am with another offering that probably won’t please all romance lovers. 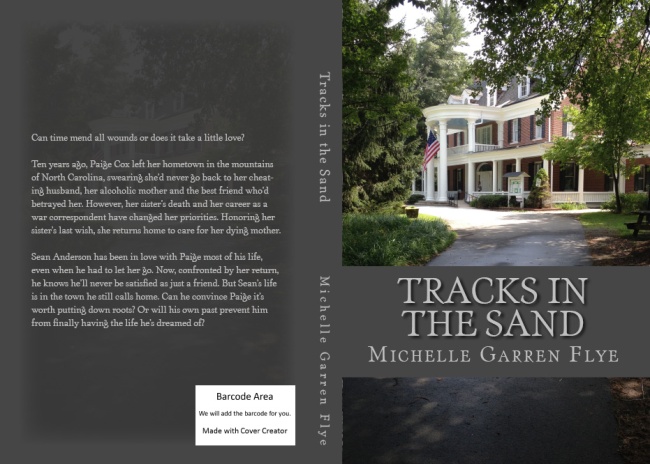 Tracks in the Sand has been turned down by some of the best romance publishers out there. I suspect it’s because although it fits RWA’s definition of a romance (it has a central love story with a happily ever after ending), it isn’t your mama’s romance. And it’s not what passes for romance in today’s market, either.

First of all, my heroine is a tough little bitch. Seriously, she is. In fact, one of the editors who turned Tracks down originally told me she couldn’t relate to the heroine as she was written then. I softened her a little, but I didn’t want to change her too much. She’s been through some serious shiznit in her life, and her current attitudes about people and situations reflect that.

By contrast, my hero is not an asshole. He’s warm and kind and exactly what the heroine needs to heal. He knows what he wants, he’s not afraid to go after it, he’s even successful—although not a doctor or a lawyer or any of the typical trades. He’s not even a fireman. In fact, he owns a hardware store.

And though the romance is central to the story, the heroine’s journey is fraught with many topics you don’t find in typical romances. Cancer, alcoholism, and child abuse to name a few. Not romantic subjects but perfect obstacles to add a touch of reality and depth to her story.

So I have to say…don’t read Tracks in the Sand if you’re looking for escapism. It’s not that kind of romance. However, if you want a story that’ll make you believe in the strength of love and family and forgiveness, I think this one might be it.

1 thought on “I’m not sure I actually write romance.”