Still plugging away at National Novel Writing Month (NaNoWriMo for the uninitiated). Despite a late start, I’ve caught up and haven’t had any trouble keeping up with my daily quota up til now. However, I’ve committed one of the most heinous mistakes of NaNoWriMo. After writing like a madwoman for the past two weeks, I started re-reading what I’ve written after I caught up. Eeek. Did I write that? Spelling errors and grammatical mistakes peppered the manuscript. Remember my friend McKenna’s Negative Scripts Project? Well, my negative scripts came roaring back. “You actually thought that was good when you wrote it. That’s crap. You overuse ‘look’ and ‘gaze’. How will you ever rewrite this so it’s readable?”

Yep. Bad idea to try to read a NaNo novel before its time. Like wine, it’s best enjoyed a month or two after draft. (I don’t actually know if that’s true!) So I took a breathing moment today when I’d reached my NaNo quota. Here’s some of what I saw:

I realized in the big scheme of things, how badly I write this novel isn’t going to matter for quite a while. I’ve got WINTER SOLSTICE to finish editing and ALWAYS FAITHFUL to rewrite and find a home for. Only then will I be able to return to DUCKS IN A ROW and bemoan how little time I took self-editing as I wrote. It’s oddly freeing to realize that the only thing that matters this month is that I finish. So what if they’re not all good words? Fifty thousand of anything is worth spending the month doing, right?

One more breathing moment, just because it was such a beautiful day and the Spanish moss looked so cool with the autumn leaves: 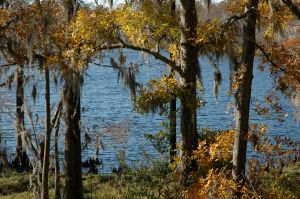 Of special note: My friend Ellen Meister is preparing for the release of her new novel THE OTHER LIFE by giving away some pretty cool t-shirts. Check it out here: Side Dish.