I’m giving away one of my books each day of this work week and using the opportunity to spotlight them and give you a little background into why I wrote them on this blog. And to sweeten the deal, I’m offering a $50 gift card for anyone who writes a review of one of my books on Amazon and posts it by August 15. Winner will be chosen by random drawing that evening. All you have to do is drop me an email at michellegflye at gmail dot com to let me know you posted the review. I want your honest take on ANY of my books (including the three published by actual publishers), not just the five I’m offering for free, but if you want a free book, here’s your chance! 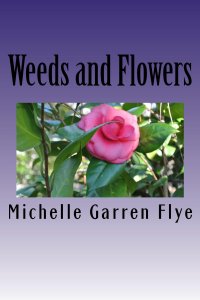 Weeds and Flowers is the one book I’ve written that I would not classify as a romance. It’s about growing up in a small town and losing faith and finding your first love and lots of other things, but it’s not a romance. It’s a mystery, a coming-of-age story, a story about family and friends. When someone asks me which one of my books they should start with, I usually say this one. Because at its heart, it’s what I’m really about.

Weeds and Flowers is set in a small town and it’s very loosely based on a murder that happened there when I was a girl. That murder changed things in my trusting little town. It happened just a few blocks away to a girl who lived a very similar life to my own with a family and friends who loved her. Although I’ve changed names and circumstances, it was that time period that changed so much in my town that I wrote about.

Here’s a few paragraphs from what might be my favorite of all my novels:

On Friday, I spent the night at Marleen’s. Mom didn’t really like for me to spend the night away from home, so this was a rare treat. “Have her over here,” Mom would always say, never seeming to realize how difficult that was. Mom liked Marleen because Marleen always behaved well in front of parents. “She’s quiet and ladylike,” Mom said. “Maybe some of it will rub off on you.” To which I’d reply that if Mom didn’t want a tomboy for a daughter, she shouldn’t have let my real dad give me a boy’s name.

But even Mom had to admit that if I kept turning Marleen’s invitations around and insisting she sleep over at my house, somebody would get offended. Marleen didn’t mind, but her mother was sort of touchy. Mom said Mrs. Galloway came from the wrong side of the tracks and often thought other people didn’t think she was good enough for them. Besides, I wanted an opportunity to see Kyle up close without seeming too obvious. And Friday should be perfect since Marleen’s parents were going out and leaving Kyle in charge.

“I hope Jeff doesn’t bug us too much,” Marleen said. Her brother Jeff had become a little creepy, in a greasemonkey kind of way. “God, I wish I just had one adorable brother like you do. You know Kyle’s planning to bring his new girlfriend over?”

I shrugged, as if I didn’t care. She knew, of course, but I hated to admit my hopeless crush, even to my best friend.

But Marleen just sighed. “Neither of them has an artistic soul, you know? I mean, all Jeff cares about is cars and all Kyle cares about is girls. There’s so much more to life than that. No one understands me. Well, no one but…”

She broke off, but I suspected I knew who she was talking about. She’d been over to Mrs. Whitford’s garden again, talking to Brian. I didn’t go with her when Brian was in the garden anymore. I wasn’t sure why, but it seemed weird to me that he was so interested in talking to Marleen when he was a good twenty years old than her.

Brian wasn’t in the garden when we got to Marleen’s house, and Kyle wasn’t home yet, so I let Marleen convince me to go to the garden. Most of the roses had withered, and there weren’t so many bugs as during the summer, but the garden still had a creepy feel to it. Marleen and I discussed the school Halloween dance for a while. Who was taking who. Who wasn’t going. Who would probably kiss who. Who would ask us to dance if we decided it was worth our while to go.

The back screen door at the house banged shut and we peered through the thinning bushes to see Brian pulling spades and hoes and shovels out of the storage area in the basement of the old house. He didn’t appear to have seen us, and with difficulty I managed to hold Marleen down. I didn’t want to have to talk to him. She giggled but acquiesced.

We watched as Brian pulled what seemed like every gardening tool he owned out of the storage closet, then seemed to find what he was looking for. He stood, stretched, and turned slowly, his eyes scanning the garden, a trowel in one hand, a bag of bulbs in the other. As we crouched in the garden, the scent of damp earth and rotting plants filling our nostrils, Brian drove the trowel into the ground again and again. I could hear the thud of its blade, the ripping sounds of roots and sometimes a tiny clink as it hit a rock or pebble.

Finally, tired of watching Brian thrusting into the earth, I tugged on Marleen’s shirttail. She shook her head and stayed where she was. I shrugged and headed for the fence, crawling with my head down. I wasn’t able to see Brian or tell for sure if he saw me, but the stabbing noises continued. Only later, when Marleen joined me in her yard did I realize that Brian couldn’t have escaped seeing us from his back porch as he came outside. Somehow realizing he’d known we were there and acted like he hadn’t creeped me out even more.