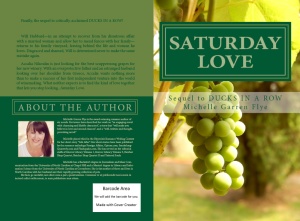 This year I will self-publish another book on January 1. I’ve done it for the past two years, and I now think of it as my way of renewing my pledge to keep on keeping on at the writing and publishing thing. But it does have a story…

It was after Christmas, everyone was content, and for once I wasn’t running anywhere or doing anything. That’s when I decided to take the leap into self publishing. I already had two ebooks out (Secrets of the Lotus and Winter Solstice) through Lyrical Press. And I had this third manuscript just kind of hanging out on my computer desktop. (Stephen King calls them “trunk novels”, and the description is pretty apt. Because you don’t know what to do with them, you tuck them away somewhere, but every now and then you open the trunk and have a peek.)

That was how Weeds and Flowers came to be published. Half young adult romance, half coming of age novel, a sprinkling of mystery and a pinch of autobiography, Weeds and Flowers doesn’t fit in any particular genre, but I always knew it was a good story. Even if it is a tough sell. I first published it on New Year’s Day 2012 through Kindle Direct Publishing, although it’s gone through revisions and is now on its third edition (and available in paperback as well as ebook).

Last year I found myself in a similar situation. Kids happy, husband happy, everyone content to stay in for an afternoon…and lo and behold, I had another trunk novel just begging to be published. That’s how Ducks in a Row found its way into the published world through the magic of CreateSpace and KDP on New Year’s Day 2013.

This year, I’m doing it again, but I’m doing it on purpose. Saturday Love is the sequel to Ducks in a Row, the story of Will and what happens to him after the events of Ducks. In Saturday Love, you’ll become better acquainted with Will’s loving and lovable family, including his handsome brother Patrick (the one who coins the phrase “Saturday love” to describe the way he feels about his new girlfriend), his younger sister Lisa (who may yet have her own story…) and his beautiful, strong mother Anne, the matriarch of the Hubbard clan. And yes, it’s a romance, so there’s a new lady in Will’s life. You’ll be able to find Saturday Love on Amazon and many other online retailers in paperback and on Amazon for Kindle on January 1, 2014.