I’m on vacation, which means I’m not writing, but I’m not just gathering rosebuds. As a writer of romantic fiction set (mostly) in the South, I’m always doing research. I’m gathering material. Raw material. Very raw, some of it. For instance, yesterday, I saw alligators. Enormous alligators. Some of them with heads as large as my five-year-old daughter and tails as long as me. Here’s a sample:

I was in awe. Very impressive. I tend to put things that impress me into my stories, so you probably shouldn’t be surprised if gators figure into a future storyline pretty prominently. I also saw some other rather impressive reptiles in the scaly flesh. I’ve admired the king cobra for a long time. I used to draw pictures of them on my notebooks at school. I thought they were badass. Seeing one in person did nothing to dispell that image for me, either. To quote me: “Oh my God, that’s all one snake.” 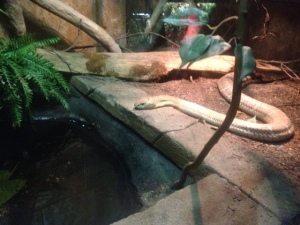 I can’t quite figure out how to fit a cobra into one of my southern romances, but an equally impressive and much more likely alternative might be the cottonmouth or water moccasin. As luck would have it, a few tanks down from the cobra, I encountered one of these, thankfully with a wall of glass between us. 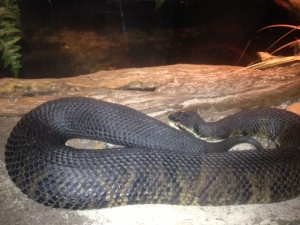 I couldn’t take my eyes off this one, but in spite of the glass between us, I didn’t dare get too close, either. I’ve grown up around snakes and I’ve always been warned to stay away from all of them, but the cottonmouth is the one that I’ve heard the worst stories about. The rattlesnake warns you, the copperhead hides from you, but the cottonmouth will come after you if you piss him off.

So how can I fit all these cold-blooded reptiles into my love stories? I can’t swear I can. I already had a heroine do battle with a copperhead in Where the Heart Lies. (I did enjoy writing that scene, which was inspired by finding a copperhead in my own backyard. I didn’t kill it, by the way. My husband did.) I do know a warm fire feels much warmer after you’ve been outside on a cold day, though, and it might be interesting to find out how hot and bright the flame of romance might burn against a colder backdrop than what I usually use.