Since HONEOWP is a group effort, I thought I should share the thank you email I received from Prince William and Princess Catherine (Kate).

We would like to thank you so much for your charitable gift. We are immensely touched by your thoughtfulness and generosity.

Your donation will be a great help to the work of those charities you have chosen.

We are very grateful for all the support that has been given to the Charitable Gift Fund and it is our hope that we can use the occasion of our Wedding to make a real difference for these very important initiatives.

Thank you again for thinking of us,

With our very best wishes,

Very nice. Sort of made me feel like part of it all in a very, very small way. Of course, this is a computer-generated form email, but still. It was nice to get it. Reminded me a little of the thank you notes I had to write way back when I got married. Despite my aching fingers, I remember feeling good that so many people wished us well. I’d love to know how much the royal couple’s charitable effort has produced.

In other news, I sent back the final line edits of WINTER SOLSTICE today. If you missed the cover art for WINTER SOLSTICE, well, what the hey, here it is again: 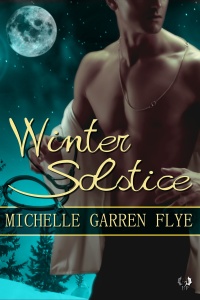 He looks a little cold, doesn’t he?

And in other news, I’ve officially retitled my latest book (the one I’m shopping around now). ALWAYS FAITHFUL is now titled THE SIXTH FOLD. The title is a little more ambiguous than ALWAYS FAITHFUL, so here’s the explanation: when a military officer is buried and the flag on top of his coffin is folded, it is folded exactly thirteen times. Each one of those folds has come to mean something, and the sixth fold represents where the heart lies. My main character Alicia had to bury her military husband Ty and she starts her new life in his old hometown. Was that where his heart was when he died? Was it with her? Or was his military service so important to him that his duty didn’t allow him to think of her in the moment of his death? As she confronts these doubts and carries on with her dead husband’s plans, Alicia has to figure out where her own heart lies.