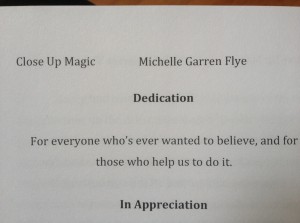 Dedication page of Close Up Magic

As I mentioned earlier, for the next couple of months, I’ll be tweeting magic, blogging magic, posting on Facebook about magic and generally having lots of fun. And I want you to join in the fun.

I’ve decided to give away a Kindle Paperwhite on June 1 to celebrate the publication of Close Up Magic. To sweeten the deal, I’ll also gift you my books Weeds and Flowers and Ducks in a Row, both of which have very good reviews on Amazon. If you’d like to enter, here’s how to do it:

You can enter as many times as you like. The point is, I love talking to people, and this should be a great conversation starter!

I’ve already been hard at work promoting Close Up Magic, although my silence over here might seem to indicate otherwise. You see, while researching Close Up Magic, I accumulated a lot of unusable but fascinating data. And I’ve decided to put it to work. Everyday I post a little tidbit of the history of magic over on the Facebook fan page I made for Close Up Magic. For instance, just this morning, I posted about the first magician to perform the Sawing a Woman in Half illusion. Don’t know? Head on over and find out: Close Up Magic Fan Page. And tell your friends!

You see, writing Close Up Magic was so much fun, I figure promoting it should be too. It’s all bringing back to me that original childhood excitement I felt when I saw my first magician at the age of five and he made me fly on a magic carpet. I had a string of magic sets as a child. Each time I got one, I was certain I could become the most famous woman magician of all time (more about women’s place in magic on my Facebook page this week). Of course, that never materialized. I always turned to a book to read or a story to write, but, hey, it was fun while it lasted, right? And maybe this is my contribution to the world of magic.

7 thoughts on “Having Fun With Magic…Wanna Join Me? Contest!”